I wrenched the last reasonably-priced dehumidifier off the shelves of Homebase last weekend, and it's been sorting stuff out since. I still have a bit of a rough chest, but the damp is in retreat, even as the temperature plummets. There's still cold and air-flow over the outer wall in the studio, so I may still have to do something;

jinty made the fine suggestion of a passive brick which, as I have an airbrick in the room already (carefully sealed under a layer of polystyrene), might just do the trick.

I gave up waiting for a dry day and harvested the grapes in the rain. When it started to ferment in the crush bowl, I was pleased. Three days later the ferment stopped, so

timscience and I learned how to use a hydrometer, adjusted the sugar content of the must, and inoculated the bucket with a sachet of Wilco Universal Wine Yeast. Which may have been overkill, as the leftover grape juice (which I popped in an old Jura bottle) is also fizzing merrily away, no yeast added, under the watchful eyes of lounge singer Lorne and the totally drunk dinosaur: 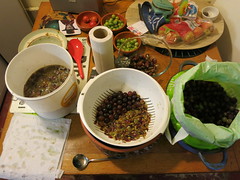 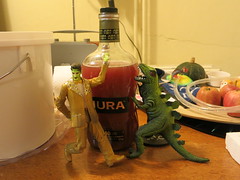 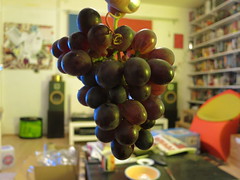 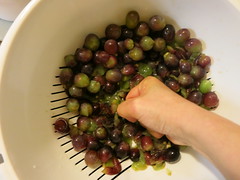 If it turns into anything drinkable (and I have a demijohn and a syphon waiting) I'm going to call it Earwig Dreaming, after the most startling piece of wildlife I saved from the harvest bag.
Collapse