Black mould is here. I buy the last dehumidifier in Homebase and it's been running on and off ever since. Casualties included my big duvet-like winter coat, a pretty bag with a peacock on I had owned since undergraduate days and my lovely IKEA daybed, which had just started to show the very first signs and would clearly go if I didn't get it gone right away. I Freecycled the hammock at the same time; it felt like saying goodbye to the possibility of lounging.

At the last possible moment, I picked the grapes and made wine. The first batch worked, the second batch triggered a response so visceral it felt like an evolutionary throwback. I do a bit more Grand Fromaging at work -- awards ceremony. The poor compère is not warned that I am a woman.

I take part in a training session that I have grave doubts about. We have a thing called the "do no harm principle". It tells us that when we are uncertain about whether an intervention will cause harm, we should not proceed. It's probably a big part of why (this area) is described/perceived as useless. This session may have stretched this principle. I wonder about the organisation, recall a similar situation I was in a few years back which ended with withdrawal of funding and the disbandment of the group and wonder if I might at some point be seen as a scary person, someone who collects organisations' scalps. Well, it needs to be done, I'm sure. 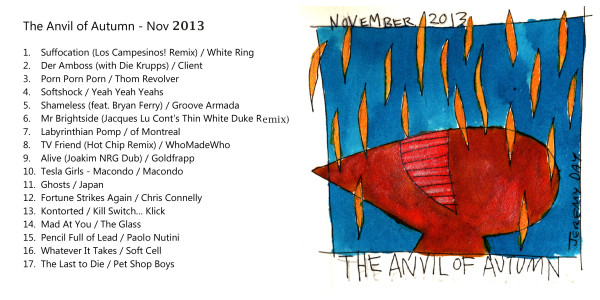 I am listening to anything where the beat goes on. I need the push to keep on going forward.
Collapse