Friday light night was a bit of a washout, so apologies to people who I a) encouraged to go or b) tentatively planned to meet up with (

damiancugley for sure). We got off the bus and freshly iced rain sheeted down, accompanied by slap-in-the-face gusts of wind. Attempts to shelter in doorways or get under cover resulted in us being chased out of fire exits because

timscience had a cup of (very nice) mulled wine. Eventually mulled wine was finished and ruffled fluff was smoothed by an earnest young man with an enormous camera asking to photograph us listening to a Memoryphone, probably because of the fairy lights round my hat. If I ever turn up that picture I shall caption it with what we were saying at the time which is "Is this one just recordings of silence?" and "No, I think the storm broke it." We never made it out to the most distant Memoryphone (outside the Said business school we thought? The map was a bit abstract) but we had already stuck our heads in three of them by that stage (big head-height metal gramophone horns which burble away in themed soundscapes from different cities - church bells, museums and which look very much like a public information service for canal locks from a world where we like posters less and listening to instruction more) so it made sense to stick with the OCM Sound and Light Trail despite the weather.

It was scattered. We squelched up to the Natural History Musueum for Phantom Field, which ran really well on a dark windy night, Cicadas (arranged in a tuned circle in Wellington Square, with and enboothed DJ sparking up the excitement whenever people turned up) and then yomped back down to Pembroke College for Piano Migrations and Music box migrations, which were enchanting, magical and somehow appropriately seeping and sticking in the rain - after all, migrations don't stop when the rain comes down. (video links so you can see what's going on) 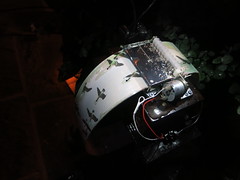 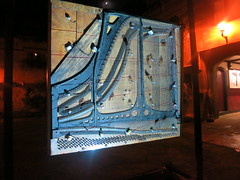 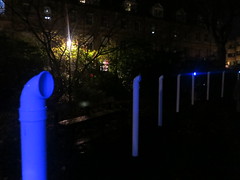 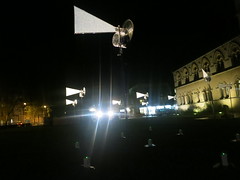 We caught a glimpse of the light-up umbrella spectacular in the Castle complex, but none of the parade, and spent a blessed ten minutes warming up in the Museum of the History of Science, watching projections of Northern Lights through the brass instruments. It was good, but without the contribution of the BEST PIE it would have been a sad cold end to the night. As it was we ended the night full of beef-chilli-cheese pie and the sort of chocolate brownie that suggests someone took a really long time getting it just right.
Collapse