When I loaded my ipod for the new year, David Bowie hadn't died yet. Blackstar was keenly anticipated but not yet bought; and I was still listening to Sparks and especially FFS, dreaming of a wistful West End Post Punk musical set in the decaying music scene of a coastal town that ought to exist but somehow still doesn't. The first week of January was bright with hope; the second coloured with grief; by the third I was immersed in work, nose firmly set to grindstone. Somehow it seemed that very sweary, shouty ladies were fitting all these moods to a tee. Hello Peaches, Viv Albertine, Charlie XCX, Grimes, Gazelle Twin, Sleater-Kinney... Tracey Ullman? 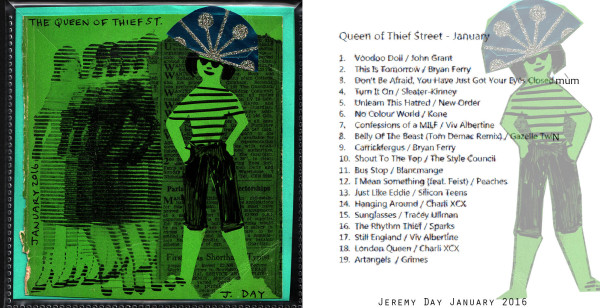 Yes, Tracey Ullman. The video for sunglasses features Adrian Edmondson (in swimming trunks) in what I can only call a muddled narrative, reminiscent of that awful short-lived series which made modern videos to match classic tunes. Rather better is the doom-laden Sparks video - and the Kone video may appeal to fans of typography, minimalism and bright colours. Peaches and Grimes are vying for best dressed; I think Peaches wins, by a nose. Okay, it's not a nose. You've got quite a few live performances, as I was definitely picking from the bottom third of the albums this month, but I'm disinclined to apologise, especially as the version of Carrickfergus by Bryan Ferry is actually better than the one on the album (oh the harpist!) I had to sub in a couple of tracks after being presented with Youtube's copyright not-very-sorry face, so you have the still-in-the-same-vein but not as sparky Memphis Tennessee instead of Just Like Eddie by Silicon Teens, and Grime's Artangles has been replaced with the rather less chilled (but nevertheless awesome) Kill v. Maim.

The sleeve is an adaptation of the Penguin Cover of The Case of the Borrowed Brunette by Eric Stanley Gardner, design by Romek Marber. Here's the original. The reverse (not shown) features a piece of the Pelican paperback cover of Brown's Social Psychology of Industry, which features part of 'Junges Madchen vor Maschinen' by Raphael Delorme. I have a bunch of old covers from broken books waiting for similar treatment.
Collapse