After my phone's last software upgrade, I was given a checkbox; activate life logging. Sure; why not; ever since ever my life has been recorded. So now my phone keeps an eye on my activity levels (though some of its conclusions are a little suspect - how did I manage ten minutes cycling, when I've not got on a bike in years?) and gives me prizes when I walk far enough. I opened the first few, before I realised that my prize for achieving an activity goal was then, was always, was every single time, an advert for a car. But it's nice to know I've been sufficiently active, I suppose.

In other news, David Bowie is still dead. My compilation for February reflects this somewhat, although I cruelly culled a great many Bowie tracks from the initial on-the-go, mostly for doing exactly the same thing as another Bowie track on the comp. As usual, there were compromises as I got to Youtube, though one of the great delights for any Bowie fan is his early, loving and enthusiastically sharing embracement of the internet. Never in your life will you go looking for a Bowie track and find the Youtube not-really-sorry face; want to see a video of the Bowie? A full concert? No problem, it's all there*. I could literally track down bits of Bowie online for years, I think and never, ever run out

So -- you don't have Taste of Honey by The Chemical Brothers. You've got the feat. Beck track with the weird hollowed out dancer instead (Wide Open). It doesn't have the compelling monotonous perversity of Honey, but it'll do. You're missing the Technova cover of Sisters Of Mercy's Temple of Love but I found a remix from roughly the same place. Red Lipstick (Naughty Club remix) by Vanity Kills is missing and I couldn't even find anything anywhere from the same Vanity Kills (it wasn't the metal band). So you have ABC's Vanity Kills instead, with its nods to (and indeed direct quotes from) Bowie. Extras: Look out for a Country and Western** take on one of the two Tin Machine performances (I've mostly avoided the well-trodden paths, bar Life on Mars) and a very wrenching guest starring from The Polyphonic Spree on a late, late Bowie concert. Here's the full track comp piece. 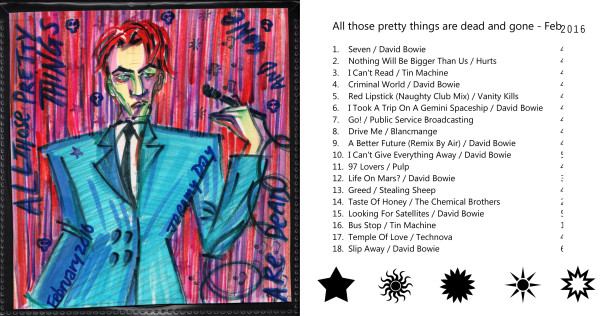 Initially I thought I'd decided to draw Bowie all wrong -- the wrong colours, the wrong pose, the wrong microphone and inappropriately in the purple rain. But it actually ended up looking quite a lot like the old Athena Postcards (which of course I owned).

*Almost all. That Spitting Image skit where he sings "Jealous Man" to Spitting Bryan Ferry - still missing.
**Yes, Bowie does a voice.
Collapse