I've been feeling a bit down this month, of what source I don't know. Obviously the denture is bugging me, and I got a bit ill, and I've been feeling the cold (although, as my mum reminded me, it's obviously got quite cold again) and there's a sense at work of a changing of the guard, what with my boss leaving, and a whole bunch of other people leaving, and me feeling like what I'm doing isn't exactly gripping me any more, or isn't quite in the place of what's happening that I need to be operating in any more. I need to not parlay this into leaving though; if I leave near learning I theoretically have to pay back tuition. So for the next 18 months to a year I'm doing what I'm doing, whatever it is that I'm doing. But I feel like I need something new.

So, the allotment. It turned up on the Yammer at work, in the manner of these things, just as I was fretting about a bunch of squash seedlings I'd just germinated and didn't have space for, and a blueberry bush that has outgrown my garden, wondering if anyone with an allotment might want to take them. Instead I took an allotment. It's on Van Dieman's lane, a tiny interstitial residential plot-set of about fifteen plots backing onto gardens with plumbed in water-troughs to fill your watering can (speaking of which, I need a galvanised watering can I can paint DAY on in rough red letters, where do I get one of those? Ebay?)

It's been a bit neglected for a few years, and it does need a bit of work. But the allotment sheds contain communal strimmers and a mower to get things started, and above all, it's a good plot. The previous occupants had left down a bit of weed supressor and the soil underneath was lovely stuff. Here it is: 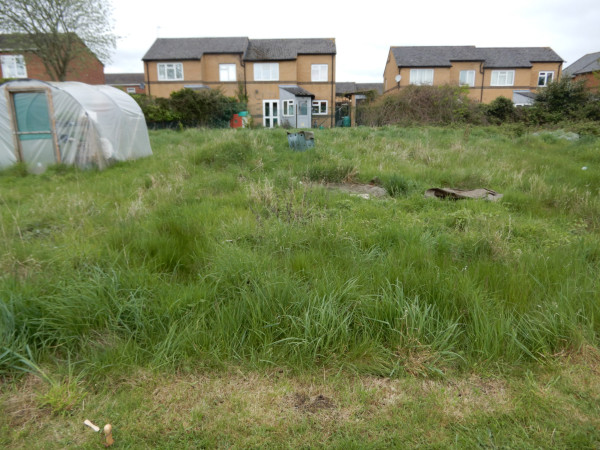 There's a load of crap in there; paving stones, a sort of compost-y thing, some herb bushes. Discoveries await! Not tonight though because it's bloody freezing.
Collapse