It's an odd thing to think about, what went wrong with compilation-swapping last year. I got ill, certainly, and the creeping sort of ill that leaves you suddenly iller than you thought, unexpectedly. My ipod, which I had been using to pre-sketch the compilations, stopped holding charge, and that didn't help. My current set of headphones are OK, but have an annoying plastic cover which gets sweaty in hot water, and then there's listening up at the allotment and in the gym now, and neither of those have a good noting system attached. But I also felt like I was stressing people out, or giving them a job they didn't want, or hassling them unreasonably, or bothering them. So I quit trying to do this after this month. It also seemed awkward to carry on with my comps after I'd invited everyone to join in I was sick of seeing (and hearing) all the little stressed-out apologies for not having done one themselves, so clearly even seeing the comps was a problem, so I stopped posting them. I didn't stop making them, because it's a semi-automatic process thrown off behind me as I listen to music, but I did stop doing the drawings, because, yes, I'm not about feeling more awkward for no useful reason. So I had to wait until that slightly moody feeling was gone, which is why I am actually posting this in April 2020. Finally got around to drawing that picture, too: 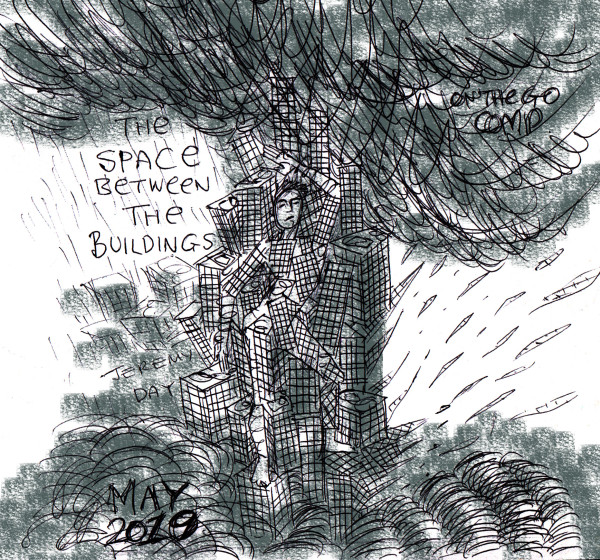 This is a picture of me doing urban yoga. This is a yoga style where instead of imagining yourself to be frogs or dogs or cows or trees or whatever, you imagine yourself as part of the urban environment. Many of the poses are very similar; Towerblock, for example, is a lot like Mountain (though you should have squarer shoulders). The Neon, Sodium and Superbright LED salutations are pretty much what you would expect. The idea of finding a space between the buildings (to live, to enjoy, to thrive) is core to anyone living in a city; concrete grounding, and pigeon of course is still so relevant. Here's a little Youtube playlist of the tracks. There are a couple of substitutions - Art Brut's Let's get Drunk about it was not available, so here is Hospital instead and you have a different Mark Pigden track, sorry. The recording quality on The Overload's track is so bad, it's barely worth including. Biltone has been replaced by Super Numeri. Nevertheless, it's a reasonable stab at May last year, a golden time when we could go outside, go to gigs, throw parties.

Here's the full track-list, for the curious: