gogol bordello at the zodiac 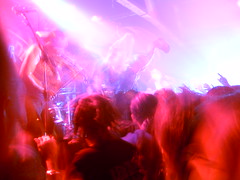 One of those fridays that are three evenings folded into one last friday. This is from middle-friday, Gogol Bordello at the Zodiac, just as the gig was starting to take off. There are a few more over on the Flickr-stream, apparently

archie need the pictures to impress beautiful americans or something ... I got in bang on time to see Fighting Cocks in support who were treating folk, country and world with the respect it so richly deserves by throwing scratching, rapping, screaming and a pounding beat in its general direction. Good stuff, very Lost Vagueness ... then Gogol Bordello came on and bit by bit the floppy-fringed oxford shoegazers were replaced by mosh and pogo, stagedivers going down like enthusiastic otters, a mass stage invasion, Pamela crowdsurfing on a giant bass drum (while playing it!) in a forest of cameraphones, violin strings shredding into the audience, etc. etc. Good night, I bought the t-shirt. There was even a fight! ... actually, that's not so good, is it? Never mind, no-one was hurt. And it was GREAT!

EDIT: And, I wonder ... that guy I walked by on the way to the bar who looked like Phil Jupitus ... was it?
Subscribe