Further to the rocket vs. airship shenanigans of last weekend,

damiancugley has youtubed the heck out of it. Laugh along with this film as I attempt futilely to control the airship, while it dives, thrashes and ultimately bursts on 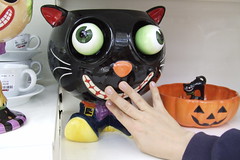 I Wants It
Originally uploaded by Damian Cugley.
The black cat picture is from TK Maxx. They're got the Halloween tat in, including full-sized mummies and more grinning cats than you can shake a stick at. More of the same if you click through and look.

Addendum: I like this rather bewitching blog full of pictures of little people in a huge world. ETA: Syndicated to