Blimey. Admittedly I'd been warned by the "out of order" sign on the toilet door, but I wasn't expecting the sort of sight one doesn't normally see outside of festivals...

Fortunately, I was only there fetching water for my plants. They need a bit of potting on, actually. And I'm beginning to wonder whether the jasmine is really getting a little large for the office ... 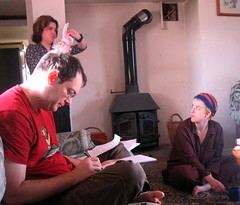 We have received presents from Debra
Originally uploaded by jinty.

jinty's it's because I'm at the midwinter comics retreat, where we made a mighty comic of seriously impressive length. Width. Whatever. There was loose talk of the

girlycomic crew getting it out in time for the Birmingham comics show next week which would be some feat! Shan't be at it myself, alas -- it clashes with All Tomorrow's Parties. Well, something always does.

See that stove there, lurking behind me? -- I lit that, on Saturday night, when the wind was owling fit to raise the dead and the ancient fly-filled, creaky farmhouse was doing its best impersonation of the sort of deeply spooky rural location Torchwood would ruin thoroughly with poor camerawork and inconsistent characterisation. With my own hands! (And

In other news, after the ultrasound and the dental hygienist, I'm thoroughly sick of strange women sticking odd plastic apparatus into me.