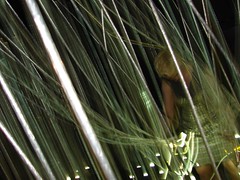 Some long strange weekend there. This is a picture of myself at explore @ Bristol, playing with a monsoon shower of strings unexpectedly found by

motodraconis when she was looking for a less crowded bathroom, in a brief pause between the lounge singers and strippers. Oh yes -- while you lot were gazing at the lunar eclipse, I was drinking overpriced wine and watching burlesque in a function room over a kids' science museum, in a ridiculous silver dress (above). After we'd finished playing with the lights, I went to ask the bemused museum guards who the artist was that had made this miraculous installation. How little I know of the ways of science! It had been made by Orange, the rainbow phone of the future, and its chief function was to keep queues of children amused. Fully told, we headed back into the lights, and took many photos, of which this is my favourite.

We'd preceded that by spending most of the morning in an outside hot-tub, courtesy of a spa in a converted four-storey townhouse in the Suburbs or Bristol. The spa cat joined us briefly -- one of those fluffy white ones that seem to have too many toes. Other good things, like juice and jewellery and wasabi chocolate fudge cake conspired to clutter up the afternoon so much we were all rushy and aflutter for getting to the venue on time. Alas, we were not actually sufficiently late, and had to spend a considerable time, horror or horror, queuing. By way of compensation, we were seated next to the best-behaved hen night in England. And greeted by the sight of Venus Noir's amplitude. And sung songs about FAQs and bad texting etiquette.

By the end of the evening, however, the Lounge singer clearly had The Fear. Too many corsets can do that to a man. And boy, was the room full of corsets. Big corsets, small corsets, corsets under dresses, corsets over dresses, corsets designed to be seen, corsets that were escaped underwear masquerading as outerwear ...

Fortunately my companions were (instead of corsets) wearing the best dresses in the room. They're good that way.

As a reward for my lovely weekend, the railways gave me one of those special trips home, the kind that seems to go on forever.

Never mind. At the end of it all was lovely

timscience and a quiet meal out in an early-evening Kasbar. We went dutch, just like we did on our first date there.