catbus is there and everything 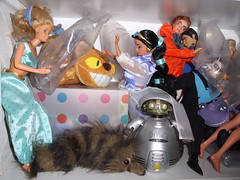 the dollies are having a happening
Originally uploaded by Jeremy Dennis.

One of the bags of charcoal I had delivered by Mr Tescos came packaged in little transparent cushions, so now the dollies are having a happening. The weasel who lost his ball is looking a little cowed by what's going on, but catbus is well into the swing of things.

It's the first time I've seriously done the shelves since I moved in; before I've given them decorative, functional and sorting passes, but never the full three. Here's hoping I've hit on a practical arrangement.

Other than that, I've been drawing pictures of myself in a turban, smoking a hookah. And wondering what sort of angles would look good for a comic strip shot mostly around a spiral staircase. Hmm, maybe I should rent out Vertigo?

I can see blue sky outside, but I suspect it's cruelly mocking me.

EDIT: Today's Wondermark explains exactly why I read him. And links to some funny old comics panels. I think the Lois Lane one is probably from the Lois Lane adventures which has a picture of Lois being spanked by robot Lois on the cover. What a weird comic series that was.