had a bit of a tiring weekend 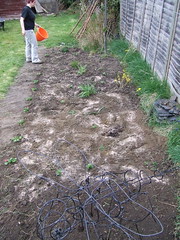 Sand Tells Us Where the Seeds Are Sown
Originally uploaded by Damian Cugley.

Reclaimed the couch grass choked wasteland on the far side of the path. Wildflower mix. Canary vine for the big metal dragonfly. Sunflowers along the back fence.

damiancugley photographed the lot of it as you can see if you click around a bit after you've gone through the Flickr.

timscience sort out a few vexing issues in his garden. Given that he views plants as dangerous rogue biotechnology apt to turn on the human race at the twitch of a tendril, I was most impressed at his tender concern for his (slightly less rampant than last year) passion vine.

In the meantime, I face a moral dilemma. The gym is full of lovely shiny machines, a steamy steam room and a toasty sauna. Classes and personal fitness program are included. They have a spinning room. But isn't joining a gym the height of Western decadence, morally reprehensible and probably environmentally destructive to boot? Heated pool! Noxious chemicals! Small fuzzy men coming across to tell you you're looking great! Unhealthy social atmosphere!

On the other hand so far the free 3-day pass has provided me with a low-impact work-out followed by stretches that has just settled the aches and pains from spending the weekend digging perfectly.

It's just like that bit where Xerxes has his hands on Leonidas's shoulders, isn't it? I'm being tempted.

This MADNESS!
No, this is LOW IMPACT LIVING!