I modded the pig slinger 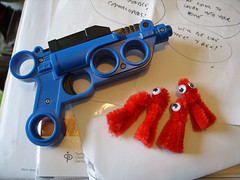 That blue weaponish thing, there, that's a Pig catapult, which someone bought me oh quite a few years ago now.

Last night I made some tiny pipecleaner squidlets, and it's now a squid flinger. Of course, it's always had the potential to project other things from its capacious barrel (or bucket, more correctly) -- in fact you may have seen during the annual ordeal that is office secret santa its sister toys the Boss Toss, Nun Chuck or Cat-a-pult, all of which make a lot more sense than a pig catapult. But hey.

Anyway, I had a great reason for making a squid slinger which has, on consideration, turned out to be a very silly idea indeed. But that's what comes of having arguments about whether a Crocodilian could take a Pteranosaur in a fight while excitably full of daquiris made by the method described in the previous post. Stupid ideas. Still, I got a squid flinger out of it, so I'm happy.