the mermaid at the fish shop

While everyone else was away in the wilds putting on strange costumes and writing comics, I was doing the usual round at home. Perhaps that's why I feel a little sad now, or maybe it's just the slightly scratchy feel of fighting off a flu that would really like to flatten me for a few days. Also, I went for a non-fashion-based solution to my boots problem (Goliath work-boots) with the usual attendant wistfulness that prioritising practicality brings (only partially dispelled by immediately buying a stupid hat).

I also had a very strange dream involving a bus, buttered popcorn and Sandy Toksvig. It's a bit tricky to explain what the dream was about (it was very, um, topologically odd) but poor Sandy never got the buttered popcorn I'd promised to get her because I had to wake up and go to the loo instead. Also, this: 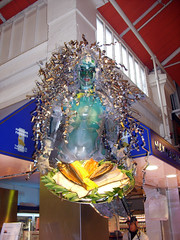 the mermaid at the fish shop
Originally uploaded by Jeremy Dennis.

It's a little difficult to parse, admittedly, but you're looking at a glass and metal sculpture of a mermaid holding a lovely display of smoked fish. I'm not sure if it's just up for christmas, but it would be a shame if that's the case. She's a thing of bizarre beauty. I particularly like the hint of internal organs inside her glassy chest.