the dinosaurs are having a bubble wrap party! 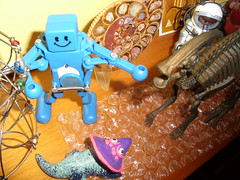 the dinosaurs are having a bubble wrap party!
Originally uploaded by Jeremy Dennis.

They've been up all night and mr dancing robot who needs no human name is still going strong. Popovich the Hadrosaur skeleton (present from Tim) brought the bubble wrap; Intrepid the supermodel triceratops has the glitter. Redhorn the Terrible (click through for some better shots of him) is in charge of STOMPING!

Tim's been singing "the dinosaurs are having a bubble wrap party" to the tune of "space invader" by Prinzhorn Dance School. It fits quite well, but (as he pointed out) the lyrics are a bit silly for them.

Speaking of which, Tim's finished the new Space Heroes of the People EP. Track 4 (Shiny Shiny) features a sample of me singing a song to Tim's cat about his shiny silver shoes. Tim's shoes, not the cat's.