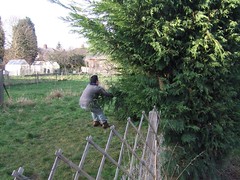 I'm weirdly entertained by this picture. While I'm obviously actually pulling a concealed tree out from behind its now severely cropped neighbours, a quick glance has me shrunk to tiny size and dangling off a stray branch. This weekend I cut more of the lelandii. They're still not all gone, though. How much biomass can those damn things put up in a few years?

Perhaps if I'd not spent half of Saturday watching the the fearsome Sweeney Todd musical of doom, I'd have made better progress. It's every inch a Sondheim musical, I'll give it that. And charmingly demented. About half-way through I remembered that it was performed at my school one year, by the sixth form, another memory I've not repressed successfully enough, it seems. (I was in the lower school at the time, and had, under protest, a minor role in Gregory's Girl.)

Also, this week's strip marks the closing of 2007's sketchbook. I'm not sad to see it go, as it was not bought under happy circumstances.