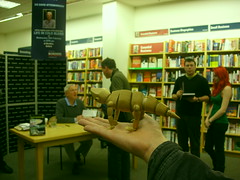 Well, he didn't really meet him, as such. He was signing and chatting at a fevered pace, a kind smile and a few words for each and every one of his adoring public (and there were a lot of them) and a scribbled signature on his sold-out book. Laggards that we were, the queue had already snaked around the childrens section and back to the toys, and anyway STRICTLY the only things being signed were copies of his current book bought from Borders in the last two hours. That guy in black? He was checking.

So we slithered into the viewpoint with Artists Chameleon and Gaudy Gecko and did what we could. Start here and hit next until Gaudy Gecko is sat on the Big Book of Snakes, bidding Dave a fond farewell.

timscience did shout "Oi, Dave, sign my lizard!" but only very quietly.