I probably ought to be posting this over in my Blog, but FIE. I could always reblog it except that I don't like reblogging, no sir, I don't like it sir. I don't like it at all. And anyone old enough to recognise that reference, can see it lusciously illustrated here.

This month: Flickr enables video posting, and the instant drownage under a deluge of cute animal videos leads to outrage of Teh Serious Photographers, and a whole pile of annoying "join my protest group" mails in my inbox. FFS people, protest something that matters. Like doughnuts! I almost spam my entire contacts group with the laughing silliness then realise I am becoming what I hate.

Last month: New lows were reached when someone on OK Cupid messaged me to say "Go on, give us a smile, it won't break your face." Given that it's literally three clicks to delete, block and never have any contact with someone again, I imagine he's going to find his time on OK Cupid unrewarding, but I adjust my relationship status anyway, just to be sure.

Month before: Am friended by a "chatterbot" on Twitter, and, bemused, I add him back. Is he real, or someone cutting and pasting spamtext? I'd ask, but Twitter doesn't work like that. The wordsalad updates are too annoying by text, but then so are the updates by various overexcited new media luvvies -- but both have merit so both stay on the longlist, for reading when I need a good laugh... 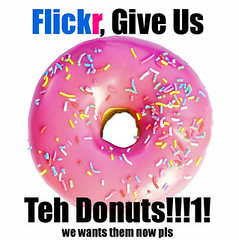