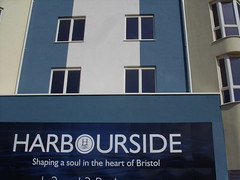 Put up some photos of when I went to see Debra last weekend, Bristol is so lovely for a Sunday wander. Though I uncovered a slightly disturbing undercurrent in the new Harbourside development. Perhaps it's aiming to feature in the next season finale of Being Human....

I was there for a weird gig, I didn't take my camera, but Debra took pictures, it was in a crazy, disconnected warehouse with a post-apocalyptic feel. It even had the drastically reduced population. Funny how Bristol's starting to feel like the post-apocalypse to me, nowadays. Last time I was there I was coming up with low-tech info-market visualisations as part of a brainstorm at a conference.

Speaking of which, earlier this week I was writing copy for an imaginary low-power robust tough phone which comes bundled with a proper Twitter package. So much of our time spent in the world of wishful thinking.

Speaking of which; to work.