no longer in storage

As I write, I'm watching Jeremy Clarkson being blown up by soldiers.They're right up his trumpet, apparently. But if they'd been really trying he would be dead by now. Television, full of lies.

Today was IKEA. I have shelves. Yaris tetris be praised. We returned gingerly through Bletchley, fingers white on the flatpacks, ill-advised impulse purchases rattling against improvised padding made from

timscience's trendy jacket. We didn't break the car or get stopped by the police, but we did annoy two young men in red joyrider cars. From the hand gestures, they planned to have sex later; I hope it was the regular type, rather than crash-style. 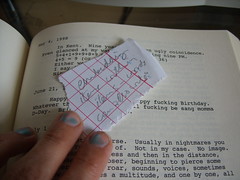 returning house of leaves
Originally uploaded by Jeremy Dennis.The picture is from

waistcoatmark's copy of House of Leaves, which I finally returned to him, shortly before I moved house. I'd filled the book with little scribbled notes, on scraps of paper. I should probably get my own copy. Um, when we have more shelves, the current lot are full.

timscience editidied a couple of pieces of music. Tomorrow we take them to Heather the registrar. Wow.