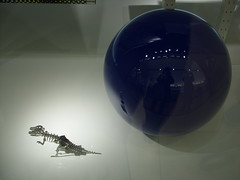 Zara children's shop window has reached some sort of apotheosis of minimalism. Does that even make sense?

I like the nifty little skellingtons. Preferring shop fittings to product happens more and more as life goes on. I was shopping for a new laundry basket last weekend. The best match was a display unit being used for cushions. Grr!

I've been making too many lists. They're starting to make me feel guilty and sad. On the bright side, though, Harlequin has just killed a plastic dinosaur almost as big as she is. It's destined for the garden, after I take some pictures.